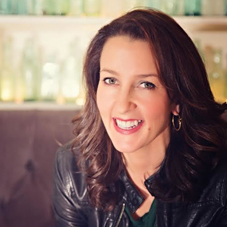 Born in Silicon Valley, California, you could say the “web” is in her blood and now is one of Britain’s most prominent digital entrepreneurs. Shaa is the author of the UK’s #1 Best Selling Business Book “Stop Talking, Start Doing”, published with critical acclaim, it teaches people how to turn business ideas and ambitions into reality.

A graduate of The London School of Economics, Shaa’s entrepreneurial career had an unusual start. After interviewing World Champion Boxer, Chris Eubank; he offered her a job promoting his next fight and at just 22 she became responsible for helping promote and organize the biggest fight to ever take place in the UK. In 1994, she established her first business, a Marketing company, establishing Dyson as one of the best known brands in the UK which has won her numerous awards including Cosmopolitan Business Woman of the Year.

She is the Founder of Smarta.com – the UK’s #1 online resource for entrepreneurs and has advised many internet companies on their digital strategies, from the government to early social networking platforms. She is an intrinsic talent and combines real entrepreneurial drive with a genuine desire to encourage and inspire others.